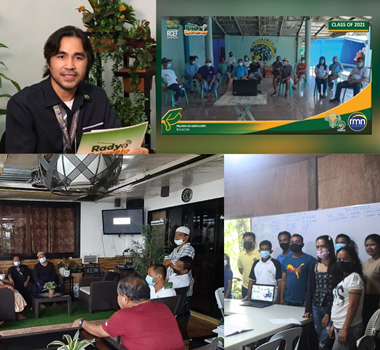 In its first virtual rites, the graduates were from the 648 farmers cooperatives and associations (FCAs) of 2019 qualified beneficiaries for RCEF Mechanization Program. For Luzon, there were 6,915 FCAs graduates, for Visayas 591, and for Mindanao 1,481. There were 6,488 males and 2,609 females.

The graduates with flying colors, 15 FCAs and five FCA member received the awards for Most Active FCA members; Most Improved; Top 5 Highest Scores (individual and Group Category) and Highest Number of Enrollees in Luzon, Visayas and Mindanao.

“This successful event marks a milestone in achieving the goal of RCEF in Mechanization Program, complementing the thrust of the Department of Agriculture,” Sec. William D. Dar emphasized.

PHilMech Director IV Dr. Baldwin G. Jallorina added that the knowledge obtained from the program by the farmer-beneficiaries is valuable and cannot be taken away.

In the same event, PHilMech recognized the technical experts who shared their expertise on the 30-minute educational awareness activity from March 17 to June 9, 2021.

The rites can be still watched in Radyo Eskwela’s Facebook Page (https://www.facebook.com/RadyoEskwelaPH/) and on YouTube Channel (https://www.youtube.com/watch?v=l66z5AnReGQ).

For the Season II of Radyo Eskwela, PHilMech will soon invite the 2020 qualified beneficiaries of RCEF Mechanization Program.